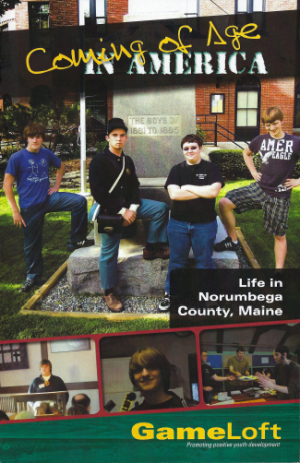 Our second platform develops special after-school programs to engage junior-high school students in history and civics. The goal is to develop creative models that reach youth at a critical stage in their lives when they are developing their own self-awareness, identities and values. Our programs involve role-playing, interactive games and community mentoring all built upon actual historical events that relate to current times.

We have partnered with the Maine Youth Alliance better know as "The Game Loft" in Belfast, Maine which has a highly successful 20 years of experience in creative programs development. We are developing Idea of America programs as models for adoption in communities throught the nation.

OUR CURRENT PROGRAMS:
We have three major current programs.

COMING OF AGE IN AMERICA

This program is designed for high school students and is currently run as an Expanded Learning Opportunity (ELO) for elective credit through a local public high school. It focuses on the lives and histories of young people growing up in Maine. It is “learning history by being history.”

* Coming of Age in America empowers young people to take ownership of their circumstances and encourages them to play a role in the life of our communities and the destiny of our nation.

* It is a program built upon historic based role playing games and brief lectures that challenges the students to reflect on what it means to be an American in today’s world.

* It emphasizes our belief that We the People hold the power to make a difference in the future of our nation. Along with that power goes civic responsibilities that are critical to our common good.

* It is an after-school program, meeting two hours a week for the entire academic year. The historic setting is established each year, identifying a particular point in our history where conflict and crises have occurred and the challenge was for we the people to resolve the issues and reach a common good. In doing so students learn how to deal with challenges we have faced in our past and how those challenges were resolved.

* In learning history by living history, we find that the students quickly make the bridge from our past history to current times. This has proven to be a far more effective means of learning from our past and engaging in our future than the traditional structured core driven teaching of our history in the classroom. But the schools have found that the students from our program make a real difference when they are back in the classroom and share their experience with others.

* This is an innovative and well tested program that requires leadership on the part of civic-minded adults who want to become engaged in the schools in their local communities. We encourage any of you who might consider undertaking a similar program in your community to contact us through our website. We have the resources to coach and guide you in developing this innovative program in your community.

This program develops role-playing games that younger students quickly grasp and fully engage. Coming of age in an era of “Dungeons and Dragons” and “E-Sports” role-playing is in their DNA. But rather than being confrontational and war-like games, our historic based games are collaborative and cooperative. The goal is to confront a given historical event that is most often confrontational and divisive and to engage in resolving that challenge in a way that preserves our values and reaches a common good. The games we have developed and tested are effective because they are experiential, empathetic and engaging. Role play enhances students understanding of story and narrative because it functions like a living text that includes character and plot development, comedy and tragedy, theme and mood, time and setting. In a role play game the students are not passive spectators or recipients of programmed knowledge but active participants as co-authors of the historic based story. 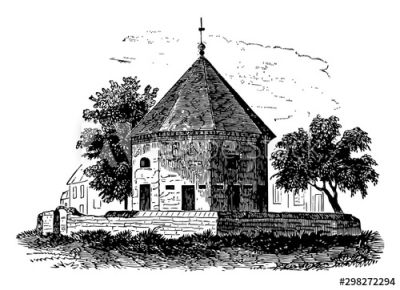 We recently developed an historic based role playing game for Colonial Williamsburg Foundation entitled: “The Magazine Episode at Williamsburg: A Royal Theft.” This is the story of two points of view. One point of view is Lord Dunmore’s. The world, as he sees it is part of the ever-more-mighty British Empire. The other point of view is yours (meaning student game participant). You are a character in a drama. The town you live in, Williamsburg in the Colony of Virginia, is about to be a stage for this drama. You will play a part in the dramatic collision between your point of view and the Governor’s point of view, between what you see as your world and what he sees as his world.

You can call this play a drama. You can call it a game. How you and your colleagues play your part will determine whose world view wins: The Idea of Empire or the Idea of America.

See our website “ideaofamericanetwork.org” for instruction manual and other resource material regarding how we developed this particular game which can serve as guidance for others to develop similar games. We have the experience and expertise to assist you in these efforts. Just contact us!

We are currently working with professional drama professors at Principia College in Alton, Illinois in scripting and staging a full-scale repertory play entitled: We.The.People. Note that the title has dots between the words reflecting the fact that this play is current to the times. We live in a world of internet and social media and .com’s. The stage manager who will open the play will appear holding a smart phone. Actors will emerge from the audience to mount the stage. The audience will be engaged early in the play as participants.

The play has been scripted and staged with a new American citizen from a minority background who just received his citizenship. He is now visiting the “Hall of Legends” in our nation’s capital with his teen-age daughter to learn what it really means to be an American citizen. In the Hall of Legends he will encounter certain historical figures from our past, principally Thomas Jefferson, Abraham Lincoln, Martin Luther King Jr. and Elizabeth Cady Stanton, all of whom gave birth and expanded our most important values, particularly that of equality, to be more inclusive of all. They will meet other important figures from our legacy as well: Cezar Chavez and Dolores Huerta and other women who made a difference in advancing the cause of equality, freedom and the common good.

While the play will premiere as a traditional repertory play, it has been scripted in two acts. Act one is designed to be available to high school drama and theater departments. We want to get the message of the Idea of America and We.The.People into our schools and engage our younger citizens. We want to give them a message in a format that is far more dramatic, engaging and exciting than the normal core teaching of our history and our civics.

Note: The play is tentatively scheduled to premiere in late Fall 2020 depending on the Covid-19 and economic shutdown situation. We will then make the play available to high school drama and theatre departments nationwide. Please contact us through our website if interested in more information and contact for our keeping you posted on our opening.