The Idea of America Network currently has five major members that we work with in developing and marketing our seminars and programs in addition to our direct engagement of community-based organizations that offer various seminars/programs. 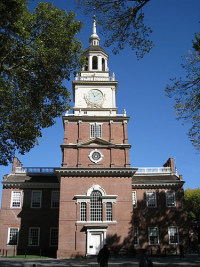 The Idea of America Network was initially developed at the request of Colonial Williamsburg Foundation leadership to expand their educational outreach programs more broadly into local communities as well as develop innovative programs to be offered onsite. We have conducted over 100 community based seminars/programs in ten states involving over 1,400 participants to date. In addition, we have developed an Onsite Idea of America Seminar launched in 2019 at Colonial Williamsburg. See attached flyer on the onsite seminar program.

The Game Loft is an innovative program developing various models for engaging young students in after-school civics and history-based learning experiences. It has been operating for twenty years as a 501c3 nonprofit corporation and is on the cutting edge of developing mentoring programs, historic based non-electronic games built off of the well-known Dungeons and Dragons model and after school historic based programs engaging students in “learning history by living history.” The Game Loft was co-founded by Ray and Patricia Estabrook who have extensive professional experience in historic role playing as actors. The Idea of America Network works in association with The Game Loft in creating innovative educational outreach and mentoring programs for local communities and organizations to offer in their communities as well as developing non-electronic games which are a very effective model for reaching a generation of young students where game playing is in their DNA.

We are engaged in creating and staging a repertory play entitled: We.The.People which is based on the primary resource book for our network: The Idea of America: Our Values, Our Legacy, Our Future. The two principles in the effort are: Chrissy Calkins Steele, Chair of the Department and Professor Jeffrey C. Steele. Both are professional performing artists as well. Jeffrey has his BA and MA from the School of Communications at Northwestern University and his PhD from the Shakespeare Institute, University of Birmingham, UK. Chrissy has her BA in Dance and Theatre from the University of Iowa; MA from Shakespeare Institute, Birmingham University, UK and MFA in Interdisciplinary Arts, Goddard College. They have extensive experience in developing and staging plays in various Chicago theatres as well as the Edinburgh International Festival in Scotland. Also they have founded the Bankside Rep Theatre in Alton with its own board and staff of professional artists. All of this gives the Idea of America Network a very experienced team to develop creative and dramatic means of delivering our message.

We have conducted our Idea of America seminars in a number of Osher Institute programs in various colleges and universities, including the College of William and Mary. But the Osher Institute at the University of Miami is our major center for testing new models and approaches for lifelong learning seminars nationwide. This effort is headed by Dr. Edwin Harper and Lucy Harper. Both are graduates from the University of Virginia where Ed earned his PhD in Government and Lucy her MA in English Literature. Lucy is a CPA and a native of Virginia tracing her ancestry back to the founding of Jamestown. Ed has extensive experience in government and business having served as President and CEO of the Association of American Railroads, Co-Chief Executive Officer of Campbell Soup Company and a number of positions in the White House as special assistant to several presidents and Deputy Director of the Office of Management and Budget. They have been leading and developing Idea of America seminars at both the University of Miami and Principia College for the past five years.

The Idea of America seminar was pilot tested at the School of Social Welfare as a graduate seminar: “The Idea of America and Social Justice” at the request of Dean Jeffrey Edleson who has been involved in the subsequent development of the entire network since. Jeff has stepped down as dean but will continue on the staff where he is taking the lead in building the Idea of America concepts and value models into the core introductory course for social welfare students and to serve as a model for other schools of social welfare and social work nationwide.

We have targeted two major academic schools in developing our Idea of America Network—schools of social welfare and schools of public policy. Both educate students who are deeply involved professionally in community organizations and governmental institutions confronting the issues that we feel are most important in shaping our society and our nation at a time of gridlock and confrontation. We are fortunate to have an association with the University of California, Berkeley which has a well known reputation for academic excellence and active engagement.

As founder and director of the Idea of America Network, I have taught many years in both the Goldman School of Public Policy and the School of Social Welfare at Berkeley as well as the Haas School of Business and the Department of International Studies, Center for Peace and Conflict Resolution where I developed and taught a graduate seminar on social justice. This is a very significant academic base from which we can expand our network going forward.